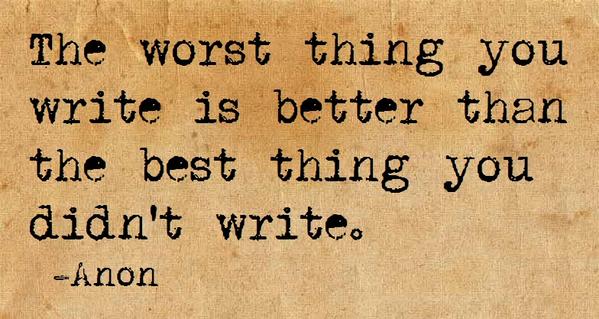 A little over a year ago, I asked my best friend which of my long-dormant ideas I should work on. I wanted her input because at that point in time it seemed quite likely that she’d be the only person who’d ever read whatever I wrote, so it had to be something she was interested in. I had been seemingly incapable of writing more than a few lines at a time for a very long eight years or so, but for some reason I felt hopeful I might be able to accomplish something if I would only try again.

For all these ideas, I had at least a few notes, some lines of dialogue, truncated character descriptions. For some very old ideas, I also had notebooks full of handwritten scenes, but even these were nowhere near complete stories. For reasons that escape me now, neither of us were in favor of my working on the most likely candidate, a contemporary romance for which I had written about 30K already. I don’t actually think I even offered her my paranormal idea simply because the scope is so big and it seemed especially daunting at the time. We both liked the cross-dressing “princess” story, which had been at various times medieval, then futuristic, and finally set in an alternate 1930s, and that one will definitely be written one day, but the one she asked for was the bossy slave/shy master. I had about 15 pages of notes and scraps, but nothing was set in stone except Henry and Martin’s names.

I started working on the Ganymede Quartet about a week into November of last year, and when I realized what month it was, I wondered if I could reach 50K and “win” NaNoWriMo. That seemed like an extravagant goal at the beginning, but I actually ended up writing about 70K in what was left of November.

I did a lot of research. I had been interested in the time period previously, but primarily for mourning practices (hair jewelry, dress) and architecture, neither of which really factors into the GQ books. As I’ve mentioned elsewhere, I researched everything about daily life circa 1900: clothes, technologies, food, and entertainment, as well as the ways people thought about things such as sex, gender and society.

The first draft of GQ was about 280K, at which point I was informed that M/M romance books are supposed to be about 120K max. I personally don’t understand that. If I’m enjoying a story, then I want more of the story. If I love a book, then I love it even more if it’s long. My friend shares my feelings when it comes to her own reading, but she’s also more experienced in publishing than I am. I gave it to her to read and she insisted I would have to divide it into multiple books. She said it wasn’t what she’d expected from a master/slave book, which I was happy about. She also said she wanted more, more of everything. So I went back to work.

Everything I had researched, I researched again and in greater depth. The second draft was 527K, which was a 900-page Word document. There was indeed more of everything. I had been writing nearly all day, every day for seven months. Not every minute of it was a joy, of course, but overall it was the most fun I’ve ever had. I’ve been able to sustain the pleasure to some extent these last few months through editing, writing the Martin POV stories, and working on the contemporary AU (In the modern story, no one is a slave, they’re 26, Henry works for his dad, and he needs to hire an assistant…).

I often feel that I’ve accomplished nothing, but when I look at it written out, it’s obviously been a very productive year. I wrote what turned out to be four longish books, as well as several shorter stories, and I’ve published two titles, with two more coming next month. Putting out the main GQ books will take me through next June, and in the meantime I can finish the modern AU, play with GQ side stories, and work on one of several brand-new ideas. Of course, the “princess” wants to be written, and she comes with the promise of interesting research. I really like research!

Accomplishments have value in and of themselves, of course, but it’s definitely validating when readers find and enjoy the books. My sincerest thanks to all who have read A Superior Slave or A Most Personal Property. Here’s hoping that my next year is as productive as the last, and that readers continue to enjoy what I have to offer.

Henry and Martin’s story continues in December with Book 2 of the Ganymede Quartet, entitled A Proper Lover. Another free read from Martin’s point of view, A Master’s Fidelity, will be released shortly thereafter.

4 thoughts on “my writing year”